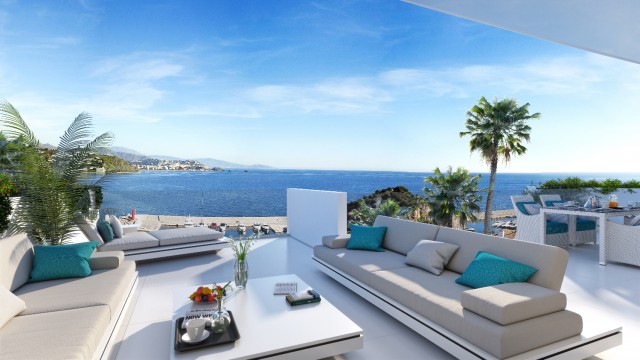 The less famous east side of Málaga

When you hear the word “Costa del Sol”, you immediately think of large cities such as Marbella and Málaga. But also to seaside resorts such as Estepona, Mijas and Torremolinos. The region has been known to international homebuyers and tourists for years, but the Spaniards themselves also know how to find the south. The Costa del Sol consists of more than just the famous places. East of Málaga are places like Torrox, Torre del Mar and Nerja. Less touristy and less Dutch, but therefore perhaps more potential.

Torrox consists of two areas, namely Torrox Costa and Torrox Pueblo. This distribution is made at several villages on the Spanish coast. The addition “Costa” clarifies that this is really a seaside resort. Torrox Costa thus represents the tourist areas, beaches and coastal strips where you can relax and enjoy the favorable climate. Furthermore, Torrox Costa is divided into smaller areas, such as El Morche. Torrox Pueblo, on the other hand, is the Old City, in the oldest part of this area you will discover the most historical monuments. To escape tourism and the bustle of the area, Torrox is located in a lovely part of the Costa del Sol.

One of the best things to do in Torrox is to dive into its rich history. You will discover the historical secrets of the city through many historical monuments. Some sights in Torrox are:

About 24 kilometers from Nerja you will find the resort of Torre del Mar. Officially, this city is part of Vélez-Málaga. Torre del Mar is located on the coast and has a wonderful wide boulevard, which is almost 4 kilometers long. You will find many small shops in the streets in Torre del Mar, but of course a large shopping center should not be missed. Nightlife enthusiasts can indulge in one of the many bars, restaurants and beach clubs. Larger music festivals are also regularly organized here. For sports activities you should also visit Torre del Mar, which includes a water park, a golf course and a go-kart track. In short: Torre del Mar is a seaside resort on the Costa del Sol where you never get bored.

Nerja was originally a small fishing village, but nowadays people live here from tourism. Many people do not (yet) know this city, which is a shame. Surrounded by unspoilt nature, this versatile city is known for its lively center, the many beaches, the delicious food and the many sights. This city has a lot to offer for culture and beach lovers. Nerja is best known for the Balcón de Europa. This balcony overhangs the water and overlooks the beaches of the Costa del Sol and the Mediterranean Sea. This tourist attraction is definitely worth to visit. Tourists who go on holiday to Spain, have not yet discovered Nerja massively. You can enjoy Nerja to the fullest in spring and autumn. The temperature is fine and it is not as busy as in high season.

The best deals on the east side of Málaga

The current housing offers in Torre del Mar and Torrox currently consists of spacious townhouses and luxurious apartments and penthouses. Also take a look at our housing offer directly from bank repossession. These are the best housing deals in popular coastal areas on the Costa del Sol, at unprecedentedly low prices.