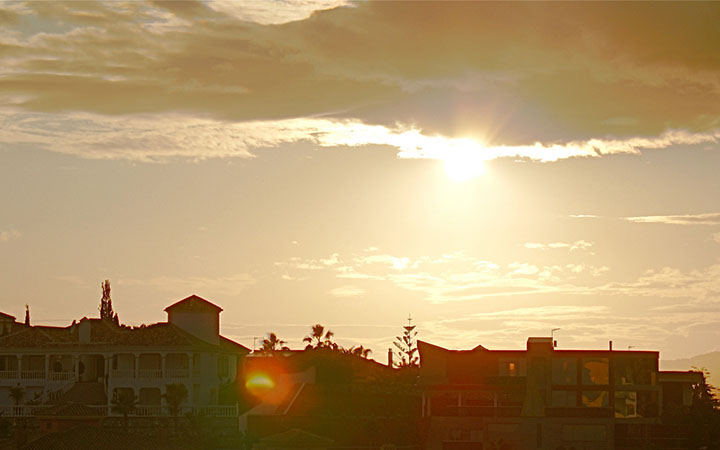 Buying a house in hotspot Benalmádena

The Costa del Sol is a popular area to buy a house. And not only because of the climate and the beautiful sandy beaches. One of the hotspots over here is Benalmádena. Characteristic because of of the various tourist sites, boulevard with numerous shops and restaurants and great houses.

The city of Benalmádena was conquered by the Moors in 711, just like most of Spain. The name of the city is therefore a derivative of the Arab ‘Ben al Madina’, meaning “son of the mines”. Not surprising, since the village originally originated around a mine.

The place was already inhabited by the Romans. Several architectural remains of Roman buildings have therefore been found. Incidentally, not only from this period. Various archaeological remains, such as Toro’s cave paintings, are even thousands of years older.

In the 18th century the Italian Felix Silesio founded ‘Arroyo de la Miel’. This area developed rapidly because of the train connection between Málaga and Fuengirola. Silesio opened 6 paper mills here. Nowadays, this area is the most commercial of Benalmádena and here you can also find several theme parks, such as Tivoli World.

Nowadays you still see some religious buildings, lighthouses and of course the cave drawings, which show that the area has an extremely interesting history.

The old town is also called Benalmádena Pueblo. A jumble of beautiful quiet alleys and streets. Most houses here have the familiar whitewashed color, which you often see in the Costa del Sol. Highlight of Benalmádena Pueblo is the butterfly park.

The sandy beaches of Benalmádena Costa

The golden sandy beaches of Benalmáldena, also called the Benalmádena Costa, offer a wealth of possibilities. In total there are 12: busy seaside resorts, but also quiet bays. Not only the tourists like to laze, there are also plenty of opportunities for sports enthusiasts. Highlight is the puerto marina where you can find great stores. Clothing, ceramics and olive oil are the most sold products. The Sea Life Center can also be found in the harbor. Ideal for the entire family.

In the evening one can discover the vibrant nightlife with bars, clubs and jazz cafés. Restaurants and eateries, especially Mediterranean, are also abundant. Gambling fans can best go to Casino Torrequebrada: the largest casino in the area.

Buying a house in Benalmádena

Most houses offered for sale are usually located just outside the city. At the moment mainly new construction projects are offered, most of which are planned. In 2018 there is increasing demand for such projects and it is expected that more and more of these complexes will be completed in the next 2 years. In fact, little is being built in the center of Benalmádena.

Actually, the existing homes here are often out of date, as you often see in such seaside resorts. Of course there are always a few unique deals between. One can assume that the prices in Benalmádena are higher, since we are talking about a hotspot. The best advice is therefore to invest in projects that will be built within a few years. The disadvantage is that it can take a while before your house is actually finished.