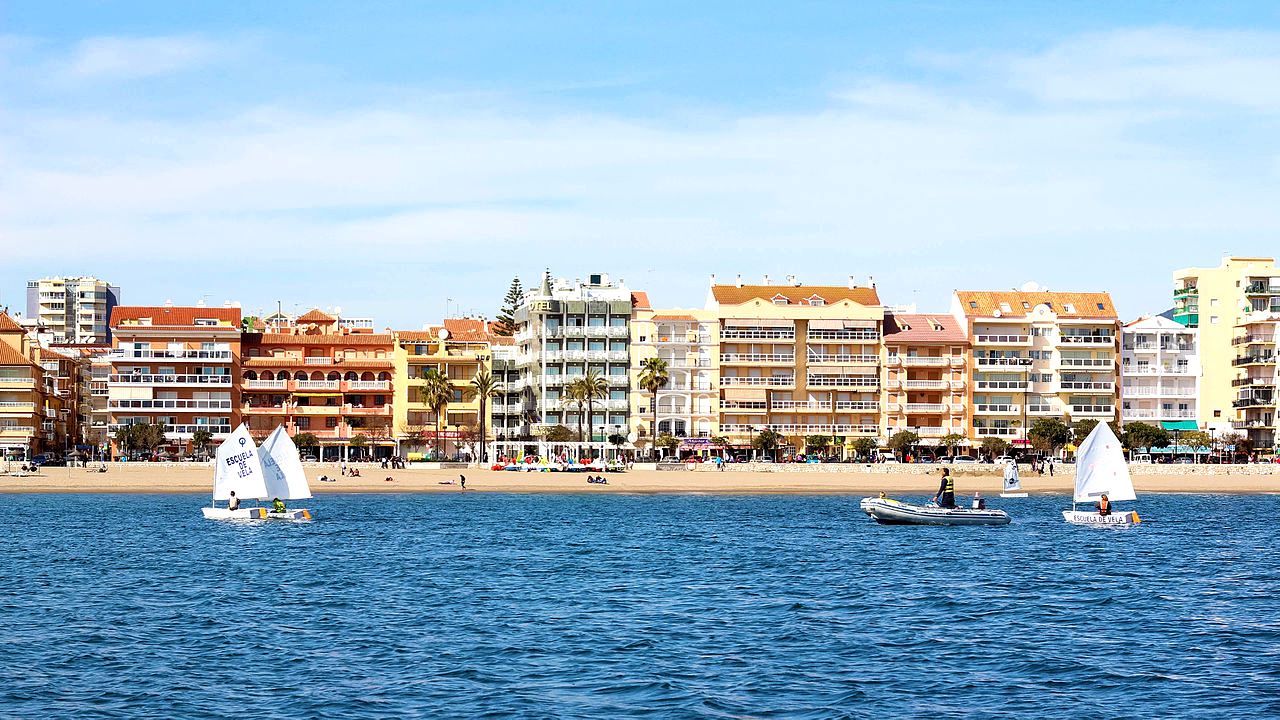 Andalusia offers many beach resorts on the Costa Del Sol. Málaga, Torremolinos and Marbella are the ones you always hear. Fuengirola Beach is also one of the most popular resorts. It is the haven for the people who escape the freezing winter. With a 7 kilometer long coastline, a great nightlife and a rich history, there is something for every tourist and house seeker.

A lot of beaches

As soon as a glimpse of sunshine breaks through the clouds, the first beach lovers march to the sea. . With almost 7 kilometers sandy beaches , one will always find a spot to relax at the (very surprisingly) 7 different beaches. To name a few of the best known and most beautiful:

Well-known for the Moorish castle Sohail, which is located right behind the beach.

This one has been described by many tourists as the best beach in Fuengirola. It has not been given the ‘blue flag’ for no reason (a quality mark for a beach or coastline that meets certain standards, for example, water quality, high environmental, etc.).

Best known for the harbor where it is located. There are plenty of facilities such as water sports, shops and restaurants. Spread over about 350 meters.

The fact that there is a place for every tourist will become clear during the International People’s Fair at the end of April / beginning of May (annual fair). During this event, tourists from over 30 countries come together to express their culture by organizing parades and various ‘fairs’.

Furthermore, various parties are organized throughout the year, such as the Beer Festival from 3 to 19 July in the Moorish castle Sohail. The party is of course based on the German Oktoberfest and therefore several traditional German snacks are served.
The medieval market always takes place in August. The exact date of this event is unknown and will always be announced a few days before the start. During this event, many handmade goods and items are sold. For the history fanatics, this event is a must, but also for the ordinary tourist this is an event that you should not pass.

Obviously during this time of the year there is a lot less to do at the coast, but that does not mean that it applies to the rest of the city. In fact, in Fuengirola, Christmas is celebrated massively among the inhabitants. While Christmas lights shine along the entire coast, music is played and lively stalls can be found on the boulevard, tourists notice that this is one of the nicest periods of the year. The Christmas market itself takes place at the Plaza de la Constitution.

As mentioned several times before, the Moorish Castle Sohail is a real tourist attraction. The castle is said to have Roman origins but was mainly used during the Moorish occupation of Spain. The castle, although it is more like a fortress, was mainly used for coastal defense. Fortunately this is no longer necessary and nowadays the ‘castle’ is mostly used as a venue for events and parties.

There is also a zoo in Fuengirola: The Bioparc Fuengirola. This park is known for its diversity in nature. For example, the park has ‘reconstructed’ various landscapes such as the island of Madagascar, Central/Equatorial Africa and Southeast Asia. In addition, the park offers many exotic animal and plant species. It is definitely worth a visit.

Thanks to the constant growth of tourists to the city (especially during the winter periods), the housing market is increasing rapidly. Particularly the English market has discovered Fuengirola Beach. Home investors consider Fuengirola as one of the undiscovered gems of the Costa del Sol, since this place – compared to Málaga and Marbella – is a lot quieter. Many new developments are underway . Interested? Then take a look at SLG Property for the latest projects in the city.