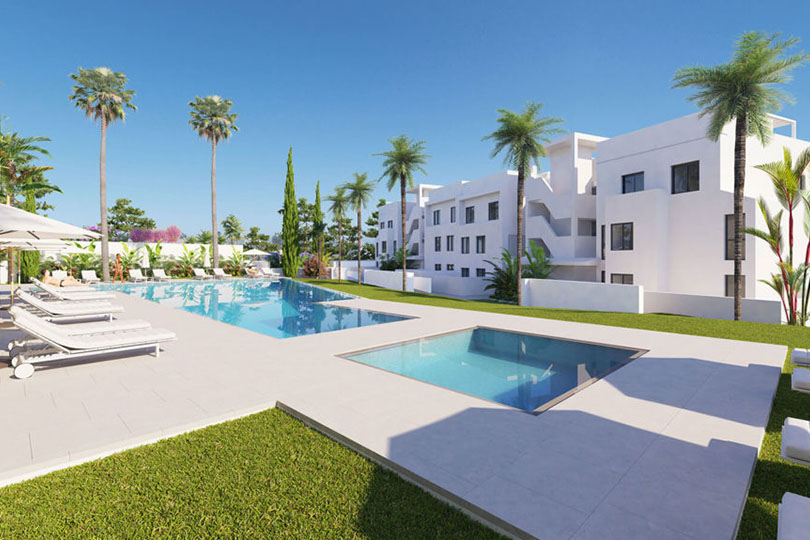 From Málaga to Sotogrande, including Marbella and Estepona (also known as The New Golden Mile), the Costa del Sol is growing. On the highways it is a coming and going of white vans, cement trucks and trucks with containers. Originating from construction and transport companies, and it looks like it will be the new standard all year round, and not just in the warm tourist season. There is a building boom on the Costa del Sol like never before.

No longer the cheap existing homes are in demand. Project developers have noticed that there is a great demand for new construction complexes and villa developments. Ten years ago they lost their jobs, but now there is plenty of work in the province of Málaga. During the crisis, as good as nothing was built and banks only tried to sell all kinds op properties as bank repossessions. Completed homes as well as uncompleted due to a fall-over or late payment. The crisis is over and banks and project developers see that home buyers are longing for new construction: new developments are planned and are actually being built.

Spaniards themselves seem to wonder whether the expansionist drive is justified. Are these developments necessary or is demand really that big? A research carried out around La Resina, an area near Estepona’s New Golden Mile, showed that no fewer than 26 new developments are planned. Beautiful new buildings, villas with spectacular views over the Mediterranean Sea, close to the golden sandy beaches, and with numerous golf courses in the vicinity.

The Spaniards are critical and not without a reason. To what extent is it not a large-scale marketing stunt to attract as many investors as possible with all kinds of lures? After all, 15 years ago the same tactic was used, after which house prices finally collapsed when the financial bubble burst.

Are these concerns right? Yes and no. As the figures show, there is a large turnout of investors, particularly from Northern Europe and Scandinavia. The same research shows that there are two housing markets; there is a new homes market, sold by developers with marketing departments and ‘advantageous’ mortgages behind them, and there is the resale market, where all people who bought in the past struggle to reach 70% of the new market prices. This applies to all types of property, such as apartments, (town)houses and villas.

If we look to La Resinera: is there really enough real demand to merit all this construction, or are big mistakes made? Have developers and investors considered so much competition in the same field in their market research? That is hard to say. However, reports from a majority of the sales offices have shown that 60% plus new homes in our study area are ‘sold off’ or ‘under construction’ at prices significantly higher than the existing resale projects in the area. The value in many cases already rises by 10 to 30%, even before the shovel enters the sand.

There clearly is a demand for new developments, although no-one is sure if it is speculative, and how much of it really is justified. The expansion drift is therefore also explicable.

Investors and buyers from different countries, many of which are Spanish, but which are also prominently discussed, are coming from Belgium and France. The Scandinavian countries are also strongly represented. Yet the local economy even benefits from the many second home seekers. The Spaniards are perhaps critical of the rapid increase, but also realize that there are opportunities. Not only in the building industry, but also for hotels, restaurants, etcetera.

Are you interested in new construction projects in the Costa del Sol? In principle, house prices are currently very favorable. So when it comes to a real interest, as the Spaniards hope, then now is the time to succeed.