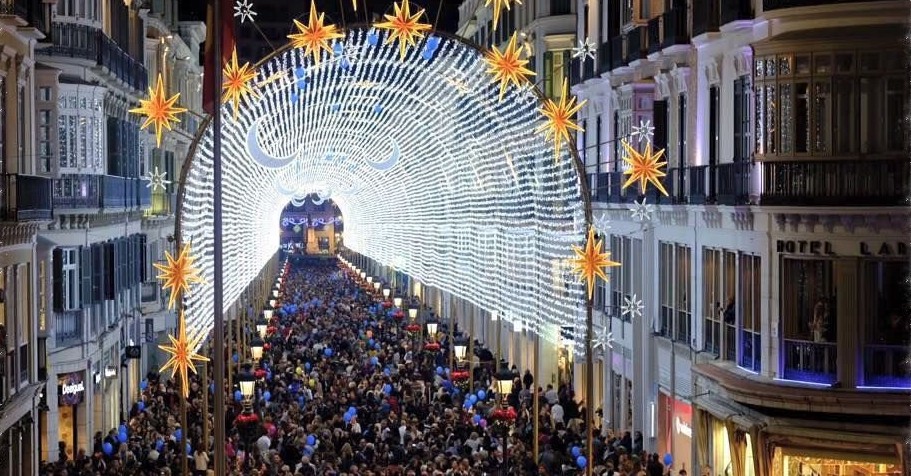 Málaga during the holidays

Even in the winter months visiting Málaga is anything but boring. Thanks to its favorable climate you can experience sunny holidays. The Christmas days in Málaga are very atmospheric, so the absolute Christmas feeling is not missing. Málaga becomes a fairy tale city because of the many lights that hang in the city. The holidays in Málaga start during Christmas and last up to the Three Kings.

The Christmas days in Málaga are sunny during the day, but in the evening you can taste the real Christmas atmosphere. They don’t have a white Christmas in Málaga. The temperature can rise so far during the day that you can sunbathe on the beach. Despite the sun, you certainly also taste the Christmas atmosphere in Málaga. The city is in fact decorated with many lights and decorations. These lights are hung in early November, which is a true spectacle every year. At the end of November they are ignited by the mayor. In total there are approximately 4 million (!) lights hanging through the city. On the Plaza de la Constitucion square is a huge Christmas tree with lights. Furthermore, Christmas decorations are hanging above the streets throughout the city.

Spaniards are also fond of sweets. You will notice this especially during the holidays at the various Christmas markets and supermarkets. You will find lots of chocolate bonbons, fruit sweets and a lot of turron. Turron is similar to nougat. Furthermore, many polvorones are eaten. These are a kind of cookies, which are available in all kinds of flavors.

Old and new in Málaga

New Year’s Eve in Málaga is mainly celebrated with family and friends. Also in the city it is often pleasant during New Year. New Year’s Eve is celebrated differently in Spain than in the Netherlands. In the Netherlands you see fireworks everywhere, whereas in Spain this only happens in the big cities. A typical Spanish New Year’s Eve starts with a large family dinner. In contrast to many places in Spain, old and new are celebrated with fireworks in Málaga. People enjoy the fireworks together in one of the many squares in the city. Afterwards the party goes on until the early hours.

Spain marks the start of the New Year with 12 bells. One grape is then eaten with every stroke of the clock. These grapes symbolize happiness for the coming year. In addition to eating 12 grapes, Spain has more traditions for the New Year. One is wearing red underwear, this provides more love in the new year. In addition to Spain, Italy and Turkey also have this tradition.

Málaga has plenty of clubs and parties. Also during New Year’s Eve there are often different parties. For these “exclusive” parties you need an entrance ticket. Which often includes a number of drinks. Tickets often cost between € 10,00 and € 20,00. These tickets can be purchased in advance.

Prior to January 5 and 6 there is a kind of tension in Spain among children like the Netherlands around Sinterklaas. These days are all about Tres Reyes Magos, or Three Kings. The big question here is: will I receive a gift this year? Children write their wishes in a letter to the Three Kings. Good behavior in the past year gives more certainty on a gift. Prior to the entry, the sage can often be found in shopping centers or department stores. Every day the wise men shake many children’s hands and accept all written wishes.

On January 5 in the evening, the Three Kings arrive during the big parade. During the parade in Málaga, large cars with their own theme pass by. Handfuls of sweets are thrown from the wagons to the children along the route. The route starts at Málaga town hall, and then travels along the outer edge of the historic center. This parade is a true Spanish tradition that children will immerse themselves in.

January 6 is a day off in Spain, where it is usually pleasantly busy in the streets of Málaga. Children are very excited and walk around with all kinds of toys. This is due to the nightly visit of the Three Kings. In the night of 5 to 6 January they are supposedly passing by. They then leave gifts in the house. Children proudly show this outside on January 6.

You can read here more about spending the winter months in Málaga.